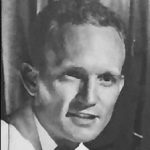 Mr. Charles Arthur Morris, passed away Saturday, Jan. 31, 2015, at Carillon of Harrisburg. A graveside service was held at 11 a.m. Tuesday, Feb. 3, at Oakwood Cemetery, officiated by the Rev. Jim Hood. The family will receive friends at the cemetery.

Charles was born Jan. 6, 1923, in Concord, to the late Arthur and Hattie Sapp Morris. He was best known as Buddy Sapp to his family and friends in Concord and often said he and one other child were the only kids he knew with two names. From the age of two he was raised by four aunts, his grandparents, and his mother. Together they had him taking piano from grammar school through high school.

He attended Brevard College for one year and then went in the U.S. Army during World War II. He then attended Davidson College where he graduated. A few months later, he went to New York City and attended Juilliard. He began his career in music by teaching at St. Bernard’s School and continued there until he retired. He was also music director at a large church and gave private lessons. He was involved with many orchestras throughout his career.