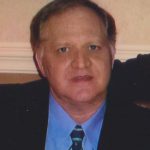 Harold Covington (Covey) Carter, 67, of Carrollton, Texas died suddenly at University of Texas Hospital on December 2, 2014 as a result of an aneurism. “Covey” was born on December 11, 1946 to the late Hattie Bell Covington Carter and James Allen Carter. He grew up in Laurinburg, North Carolina where he attended Covington Street School and Laurinburg High School. He was an active youth member of Laurinburg Presbyterian Church.

He is survived by his brother, Alan Carter; sister, Nancy Carter McIntyre (husband Joel); niece, Leslie McIntyre Queen (husband Hal); and nephews Jonathan McIntyre (wife Katie) and Parrish McIntyre (wife Sarah). He is also survived by 8 great nieces and 1 great nephew, all of Charlotte, North Carolina. Covey graduated from Laurinburg High School in 1965 where he was an honor student and a talented athlete in baseball, basketball and football. He later attended Davidson College where he played football for the Wildcats and was a member of the Sigma Alpha Epsilon fraternity, graduating in 1969.

As an officer in the ROTC program, he went into the United States Army Adjutant General Corps in Washington, DC. After his service, he began his civilian career with Springs Industries in its management training program in Lancaster, SC and later spent time in New York and Detroit. From there he became involved in the apparel labeling business and relocated to Carrollton, Texas where he launched his own highly successful woven label business called Tex Press (later, Lonestar Label Co.).

Covey was a talented artist and an astute investor. He spent much of his retirement rooting for his Texas Rangers and Dallas Cowboys. Covey was very protective by nature, always looking out for others. His niece and nephews were his family and he was in awe of both their personal and professional success. “Uncle Covey” was admired and loved by his family and will be deeply missed.

A service to remember Covey’s life will be held on Saturday, December 20 at 11 am at Laurinburg Presbyterian Church with interment at Hillside Cemetery.

Memorials may be made to Laurinburg Presbyterian Church, 600 W. Church st., Laurinburg, NC 28352. McDougald Funeral Home and Crematorium is serving the family.