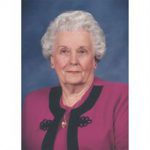 Ruth Adams Snoddy, 96, widow of Jack Drummond Snoddy, died Wednesday, October 22, 2014. Born in York County, she was the daughter of the late William Leander and Anna Webb Stanton Adams. Mrs. Snoddy earned a Bachelor of Arts degree from Winthrop College and was a member of First Presbyterian Church since 1941.

She was a retired elementary school teacher. She was a lifetime member of Women of the Church, a charter member of Good Neighbor Sunday School Class, original member of Greenville Woman’s Club, and an honorary member of Crescent Garden Club.

The family would like to thank the staff at The Gardens at Eastside for their care and support.

Visitation will be Saturday, October 25, 2014 from 1:30 to 2:45 p.m. at Thomas McAfee Funeral Home, Downtown. The funeral service will follow at 3:00 p.m. in the Downtown Chapel. Burial will be in Woodlawn Memorial Park. Memorials may be made to First Presbyterian Church Visitation Ministry, 200 W Washington Street, Greenville, SC 29601.

Condolences may be sent to the family at www.thomasmcafee.com.