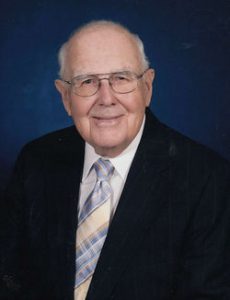 As a youth, he was active in his church and scouts, attaining the Eagle rank, organizing Cleveland County’s first Cub Scout Pack in 1938 and serving as a Cubmaster for several years.

Herman graduated from Shelby High School in 1932 where he was a member of the band and orchestra.  During the Depression, he attended Davidson College for two years, leaving to help in his father’s furniture store hoping to finish his degree later.

After his father died, he managed the store until he entered the Army in WWII serving in the Quartermaster Corp.  At the close of the war, when new furniture was scarce, Herman built a manufacturing plant which he continued to operate until selling it to the Drexel Corporation in 1962.  He then took time out to continue his college studies and obtained a degree from Limestone College.  After that, he studied and received both a Real Estate Broker’s and Contractor’s License and built numerous houses in the Shelby and Morganton areas.

In 1941, he met Margaret McInnis, who taught school in Lincolnton.  They were married in 1945. Herman was a member of First Baptist Church in Shelby, where he has served as Deacon, Men’s Sunday School teacher for over forty years and various committees.

He was active in the Christian Service Organization at Gardner Webb University and served as both President and Board Chairman of that group which raises scholarship funds to aid students studying for the ministry.  He was a former Kiwanian and member of the City Parks and Recreation Commission.  Herman loved the outdoors.  His hobbies included fishing, skiing, camping, sailing, horseback  riding, traveling, and history.

In addition to his parents, Herman is preceded in death by his son, David Best; a sister, Sara Best Dula Belvin; and a brother, John M. Best, Jr.

He is survived by his wife Margaret of 69 years; daughter, Jane Ann Best of Morganton; two grandchildren, John David Best of Roanoke Va., and Rachel Best of Charlotte; and several nieces and nephews.

Funeral services will be held Monday, August 18, 2014 at 2:00 at the Webb Chapel of First Baptist Church, with the Rev. Tony Tench officiating.  Family will receive friends from 1:00 p.m. until 2:00 p.m in the chapel.  Burial will follow at Sunset Cemetery.

Guest Registry is available at www.cecilmburtonfuneralhome.com