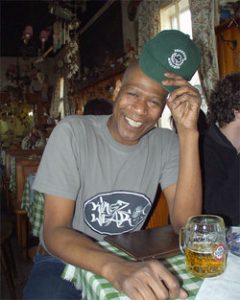 Michael A. Maloy ’70, an All-American basketball star at Davidson in the late 1960s who went on to play in the old American Basketball Association and in Europe, died Feb. 3.

An Austrian Press Agency report says Maloy died of what is described as a serious case of the flu at his home in Vienna, Austria, where he worked as a teacher and coach at the American International School.

Maloy, a New York City native, was one of the first standout African American athletes at Davidson and one of the school’s all-time sports greats. He played at a time when the team was a fixture in post-season NCAA basketball tournaments.

He once appeared on the cover of Sports Illustrated. He was on the 1968 and 1969 teams that went to the final eight of the NCAA tournament, barely losing to the University of North Carolina in both years’ East Regional finals.

After a standout career at Davidson, where he played under coaches Lefty Driesell and Terry Holland ’64, Maloy was drafted in 1970 by the Boston Celtics. He left school before graduating. Instead of joining the Celtics, he decided to play for the Virginia Squires of the ABA.

In 1976 he became the first American to play professionally in Austria, joining the team UBSC Vienna. He led that team to the championship four times.

In 1980, he became an Austrian citizen and played for the Austrian national team. He later became a coach and teacher. Apart from his love of basketball, he also was a blues musician, playing bass in the Boring Blues Band.

He is survived by a son, Ryan, and his former partner, Edith.

According to an official biography from Davidson’s sports information department, Maloy led the Wildcats to three straight Southern Conference championships and three straight NCAA tournaments. In 1969, he averaged 24.6 points and 14.3 rebounds a game.